Is Healthspan or Lifespan more Important?

Which is more important to you? 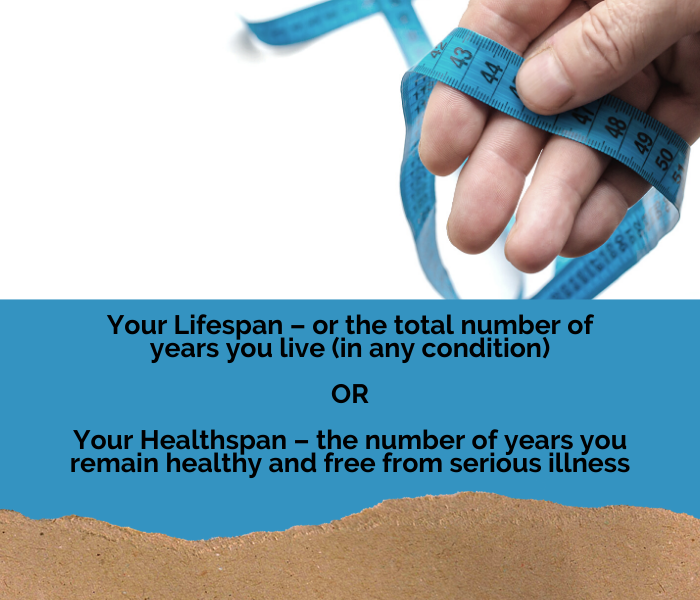 Epidemiologist S. Jay Olshansky, PhD, expressed in the Journal of the American Medical Association that “extending vitality is the goal for this century much the way extending life expectancy was for the last century”.  While a little controversial, based on the science and medicine available today, Olshansky asserts that the probability of any significant increase in maximum lifespan in this century is remote.  He would argue that predicting life expectancy has been a distraction and not nearly as important as maximizing healthy and functional “health span.”

“There is reason to be optimistic that future breakthroughs in aging biology, if pursued, could allow humanity to live healthier longer. You don’t want to live to be over 100 years old if the last 20 years of your life are spent in pain and sickness. Ideally, you want to compress the years of decay and disease – the ‘red zone’ – into as few as possible at the very end of life. We should not continue to pursue life extension without considering the health consequences of living longer lives. Life extension should no longer be the primary goal of medicine when applied to people over age 65 – the principal outcome and most important metric of success should be extension of the healthspan.” S. Jay Olshansky

Tim Peterson, Assistant Professor, Department of Medicine, Washington University flags that while the US has a current average lifespan of 79.3 years, there wasn’t a statistic to mark the end of the average healthspan.   To address this, the World Health Organisation (WHO) has developed an indicator, HALE – healthy life expectancy.  The way to approximate HALE is to figure out the average age of the first occurrence of each of the most common serious diseases, determine their incidences, and then take the average of those two numbers. For the US, this gives an age of 63.1 years old and means that, on average currently, we can live up to 20% of our lives unwell.

If we can increase healthspan, healthy people will have a longer “third age” in which they can continue to contribute to society, and the demand on health facilities and care givers will decrease.  Delaying onset or even completely avoiding certain diseases — diabetes, cardiovascular conditions, even some forms of cancer — will extend productive years while decreasing the span of a prolonged, perhaps minimally functional last phase of life.

What is working for and against increasing healthspan?

Sadly, many of our health structures do not support positive preventative healthcare.  Our health insurers often cover only when you are actually ill, rather than helping an individual avoid the illness, if possible, in the first place.  Also baby boomers consider themselves a tough bunch, and many don’t see the need for preventative health checks, soldiering on until it becomes too serious to keep going.  Additionally, getting in home support is often woefully underfunded or not available, pushing more people into care than perhaps need to be there.

However, there are regions of the world that are focused on increasing healthspan and are transforming their communities.  They are doing this by promoting facilities such as walking paths, bike lanes and attractive scenery; food markets featuring fruit and vegetables, as well as restaurants with healthy choices; societies and clubs with active members.  All of these can contribute to increased healthspan.

As Dr Allen Weiss, CMO of the Blue Zones Project shared, “Southwest Florida’s Collier County metropolitan statistical area added 0.6 years of life expectancy over the past five years. This positive result, due in large measure to the Blue Zones Project, is in contradistinction to the rest of the nation which lost 0.2 years from 2015 to 2017. Additionally, Southwest Florida’s cardiac mortality declined 8.1 percent during the same time period.”

For those who are unaware, the Blue Zones Project is based on nine principles — moving naturally, having purpose, downshifting, consuming a plant-slant diet (little to no meat), eating until 80 percent full, having wine at five, putting family first, have a positive group of friends, and participating in a faith based organisation.  These principles were learned from five locales around the world where more people live to age 100 than other places globally.

Are we ready to move on from talking about extending lifespan? Is healthspan worth a bit more understanding about how we can influence it?  What can you do to increase your own healthspan, and those you love? What can you contribute to your community to influence it also?